A Head Full of Ghosts

I read Paul Tremblay’s highly acclaimed novel, A Head Full of Ghosts, a few weeks ago and still find myself thinking about it. That’s high grade voodoo right there. Book is straight up haunting me.

Therefore, I’m not only writing this in an attempt to explain what’s causing it to linger, I want to get this shit 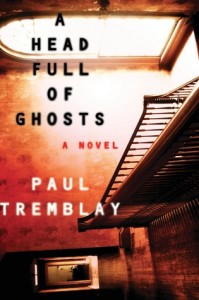 out of my head.

On the surface, Tremblay’s book is a fun, entertaining story about a family dealing with a daughter who is either possessed or mentally ill. It’s told through the adult recollections of the possessed girl’s younger sister. Recollections that appear to be somewhat confused, and almost certainly unreliable. This woman is traumatized by what she experienced as a child, even if she doesn’t realize it. Pay attention to the way the woman she’s narrating her story to is reacting and you can see how strange and damaged she’s become. For me, that’s the most horrific part.

I’m not typically a fan of the unreliable narrator. But that’s what I love so much about fiction, and art in general. There are no absolutes. Do something well, or in an original way, and it can change what one thinks or believes. I didn’t like unreliable narrators; now I do. Bam, I’m a different person than I was before. Amazing.

Here’s what you get with an unreliable narrator: dread. Unease. Have you ever known a compulsive liar? That feeling you get when you realize what they are and then start observing their behavior with detached fascination, watching as they weave their warped fantasy one sentence at a time. There’s a weird look that comes over their eyes. A type of glaze as they spin their lies or expand their gross exaggerations. You wonder why they’re doing it. Wonder if they actually believe what they’re saying. Because belief and truth are basically the same thing. Get enough people to believe in a lie and it becomes a kind of reality. Want to read great unreliable narration? Open a history book.

With Tremblay’s narrator you don’t get lies so much as you get misdirection. Maybe not even that. I think there may be something even more sinister at play. This is why the book has stayed with me. It’s left me with the feeling that I narrowly avoided a threat I wasn’t aware of at the time. Like finding out your friendly neighbor was keeping bodies in the basement. I feel like I barely made it out alive. Was saved by sheer luck.

There’s no telling how much of this skilled misdirection was premeditated by Mr. Tremblay, or if it came during the spell of writing the story. Regardless, it’s effective, and well worth your time as a reader. Just don’t let your guard down or you may wind up like me. In need of an exorcist.

Grab some holy water, and order your copy HERE.

Appearance on The Round Table Podcast

The World’s Five Most Bizarre Diseases and Disorders