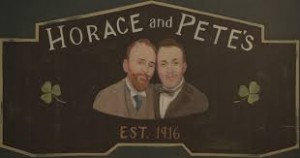 My grandparents have all passed on, but while they were alive I used to visit their homes and file through their old photo albums, marveling at all the grainy, black and white images of men and women from a different era. Try as I might, I couldn’t place myself in those pictures. I couldn’t imagine what their life must have been like all those years ago.

Part of this mental block comes from the television shows you see from, or about, that period of time – say from the late 1900’s through the 1950’s. Everyone seems so stiff, their voices mechanical and contrived. Those shows cannot be an accurate portrayal of the people back then. And I know they can’t, because the shows of our time are not an accurate portrayal of us. They offer an idealized depiction – a gross exaggeration – that is either overly optimistic or pessimistic depending on the tenor of the show.

Reflecting back, I imagine life back in our great-grandparents era, and I mean life, as in the shit that happens in our heads and our hearts, our hopes, fears and confusions, the words whispered behind locked doors, between bed sheets, was much like our life is now, just with different stuff. Mail took longer to arrive.

See, I think movies and TV shows often do a great disservice to society by misrepresenting our true selves. They present a false mirror – an ideal we aren’t able to meet, and may not even be meant to meet. And it’s not just the beautiful bodies and radiant smiles, although those superficial aspects of visual entertainment do present problems. Nor is it the convenient tropes often used to depict relationships that rarely exist – telling us there’s something wrong if we act outside arbitrary norms or don’t have sex with our spouses several times a day. Though I’ve known couples who have broken up because their relationships did not live up to the one’s they envied on TV.

The real reason many of these shows don’t accurately portray a truer version of the human experience, at least the one I’ve seen in my personal life and through my travels, is not because what they present is inaccurate (although it often is) – rather, it’s due to the important issues that they ignore. Or, if not ignore, soften and obscure with sound tracks, camera tricks, and acting techniques designed to elicit a certain response, not necessarily provide an authentic portrayal of the world from which they help us escape.

Sometimes, though, we need a mirror that provides an accurate reflection. We need to know that we’re not the only ones living with hurt and regret and fear. That we’re not cowards or simpletons because we don’t always know how to fix the messes we’ve made, or act with more compassion and nobility in the face of constant struggle. That it’s okay to laugh at tragedy, or become outraged at those who do. Sometimes we need to know that there are no answers. That we’re all lost on this strange rock. Sometimes it helps to hear someone else confess their sins, and reveal their damnation.

Hell, sometimes it just helps to see a pretty woman turned ordinary by removing her make-up.

Why? Because it binds us together. It makes us family.

It helps us see past the exotic shells we inhabit to protect us from life – the stylish clothes, the puffed-up jobs, the perfect Facebook posts – and realize how vulnerable we all are underneath. How much we need each other. How similar our stories all are, when we tell them true.

Horace and Pete by Louis CK may be the first show I’ve ever watched that feels like real life. It’s not always a happy portrayal, mind you. It doesn’t canvass the full spectrum of experience, but it does reveal a side of humanity rarely, if ever, seen on television. In my opinion, Louis CK has created more than a piece of entertainment, he may be the first human to have successfully created an artificial soul.

The show, which takes place for the most part in a small bar – it’s like Cheers turned manic depressive – addresses many of the poignant issues of our existence: identity, purpose, heritage, sexuality, race, sanity, death. Yet it doesn’t take sides or offer a point-of-view. There’s no music to sway your emotions, no audience reaction to cue you in on what to think or how to feel.

It’s quiet, subtle, patient, daring. One of the episodes consists of nothing more than two people talking at a table for an hour. That’s it. And it will devastate you. It will bring you to your knees.

Louis CK is known for his comedy. He is arguably one of the best comedians of our time. And I’m sure there have been many people who have encouraged him to just stick with comedy. To “do what you do best.” What those people don’t understand is that Louis CK is not one of our greatest comedians because he’s funnier than everyone else. His greatness comes from his ability to tell our life stories in language that our hearts understand. That’s rare. And it’s not one-dimensional. Just as none of us are one-dimensional. We all laugh and cry (except for my friend, Abe, who ain’t no gosh darned sissy).

Not only did Louis CK take a huge creative risk by stepping way outside the bounds of comedy – to call Horace and Pete a drama is like calling Jaws a guppy – he took a huge financial risk by financing the series himself, going so far as to get himself millions of dollars in debt while making the show (which he will undoubtedly recoup, so don’t go sending him donations just yet).

I don’t know that I’ve ever been more inspired by an act of artistic creation than this. Cloud Atlas by David Mitchell comes close. It’s a level that can only be reached when you bare your soul and risk everything. There’s no doubt Louis CK is willing and able to do this. And the result is a lasting masterpiece that will change your outlook on life, even if just for a day. But that’s enough. In fact, it’s all we’ve got.

Thank you for giving us Horace and Pete, Louis CK! What a profound experience.

I urge anyone reading this to start watching the show immediately.

Then, when you’re done, and you need some levity, I urge you to watch this.

Get to Know a Bram Stoker Award Nominee