We live in a strange world. Here’s me nine months ago. I’m reading a book called The End In All Beginnings by Bram Stoker Award nominated author, John F.D. Taff. I haven’t made it past the first page and I’m already mesmerized by its beauty. Certain authors have that power. They reach out through the pages and pull you in. I finished the book in a sitting or two, and then I sat for a while longer. Just staring blankly at the wall while reflecting on the beauty and emotional intensity of the book. I was so moved, in fact, that I felt compelled to write an essay on the book, which you can read here.

The End In All Beginnings was my favorite book of 2014, and ranks among the most accomplished works of fiction I’ve ever read. Suffice it to say I became an immediate fan of Mr. Taff. I was, therefore, awestruck when I ran into him at the World Horror Convention in Atlanta and saw that my publisher’s table was directly across from his. I was downright floored when he strolled over during my book signing and asked me to sign one for him. I did little more than stammer while writing nonsense in chicken scrawl.

Today I received a note from John F.D. Taff, one of my favorite authors whom I never once thought I would meet, much less have read my debut novel. He said some very complimentary things, and offered the following blurb. I tell you, friends, we live in a strange and wondrous world. 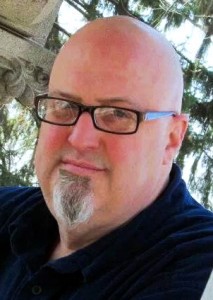 “Brian Kirk’s debut novel WE ARE MONSTERS is a sure bet. A hippy-trippy jaunt through the application of a new hallucinogenic drug to treat schizophrenics that seems to work wonders…until it doesn’t. Kirk is adept at walking you through the maze of psychiatry, science and drugs, but not letting it overwhelm the story.  And the story, as the title suggests, goes deep into the baser things we keep bottled up…and what happens when they’re freed. Highly recommended!”

-John F.D. Taff, Bram Stoker nominated author of The End In All Beginnings.

We Are Monsters just released today, joining the same virtual shelves as John F.D. Taff’s amazing The End In All Beginnings. I humbly invite you to read them both. 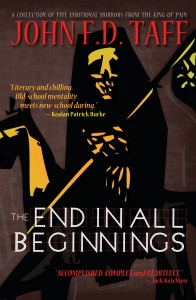 The End In All Beginnings

We Are Monsters Publicity Tour