The Ocean at the End of the Lane

The size of this book, much like the little pond at the end of the storied lane, is deceiving. There is so much more packed within these pages than one would guess by merely glimpsing it on the shelf. You must crack the cover to see the true scale of the world Mr. Gaiman has imagined. But beware. Do that, and you’ll fall inside. 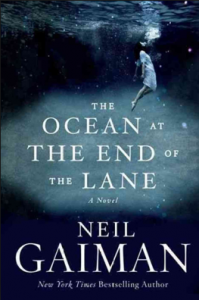 What ever happened to fairy tales? They don’t seem to capture our imagination like they once did. Literature has become so serious these days. It must depict real people living real lives in the real world. A world that too often seems boring and brooding and void of adventure.

Do this. Go to your TV and turn on the news. Watch from one commercial to the next. Consider what you’ve just seen as your world. Ok, good. Now go to your nearest window and look outside. Open your ears and listen. Open your heart and ache.

Are these two worlds the same? The news would have us believe we live in the throes of Armageddon – on the very precipice of World War III. But just outside our window we see a world filled with mostly caring people, living amidst the chirping of birds and budding of flowers, underneath a perfectly placed star that radiates just the right amount of warmth.

These are two depictions of the same world, and they could not be more different.

This more expansive point-of-view is most commonly achieved through mystical experiences. Reading Mr. Gaiman’s work, I believe, qualifies as such. It opens one up to fantastical possibilities. It helps one see the very real magic that exists right in front of one’s nose.

He does this by immersing us in the timeless art of fairy tales. No, he does not bother suspending disbelief. Why should he? Who’s to say that the story he is telling isn’t real. He seems to believe it is. That’s the feeling I get when reading it. That he has glimpsed a reality beyond our perceptual capacities and has decided to share it with us. Storyteller/ Shaman.

And he does it with a warm and whimsical style that seems to flow effortlessly from his pen, but must require hours upon hours of painstaking work. It is hard to make writing look so easy.

The Ocean at the End of the Lane is a story about magical people that may, or may not, exist. But maybe it takes belief to make them real. The same way it takes faith to be saved. Or maybe it just takes imagination. That’s where everyday stuff like tables and chairs come from, why not something more wondrous like ponds that are really oceans, and moons that stay full.

Remember what it was like to believe that there was real magic in the world? Read this book and you’ll believe again.