I’m thrilled that one of the most prolific and consistently excellent authors of horror fiction has chosen this site to talk about legends. Fitting, as Hunter Shea is quickly become a legend in my eyes. Let me explain.

I first became aware of Hunter’s work right before the release of his acclaimed thriller, The Montauk Monster, in June of 2014. That book was a huge hit, receiving tons of praise from critics and fans alike. Then, the very next month, he releases a new horror novel, Hell Hole, which again achieves critical praise, going so far as to be called “The Best Horror Novel of 2014” by Horror Novel Reviews. Not a bad year.

But then Hunter comes out with another book just four months later, Island of the Forbidden, which is almost instantly talked about as being a contender for best horror novel of the new year. WTF! Dude, care to slow down? Nope, out comes another powerful two-punch combo: a blockbuster apocalyptic novel, Tortures of the Damned, and his latest horror novel, The Dover Demon. Guess what? Both are being highly praised.

So this guy must do nothing but write. Sorry, but no. He happens to co-host a popular podcast, Monster Men, as well.

Welcome to my site, Mr. Shea. You are a rare breed. As mythological, perhaps, as the legendary creatures you write about. Please tell us a bit about the Dover Demon, sir. I’m all ears. 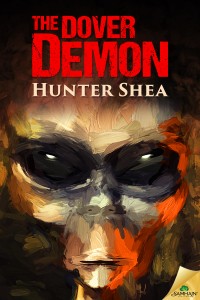 Tracking Down A Legend

By Hunter Shea, Author of The Dover Demon

When people see the cover of my latest book, The Dover Demon, they immediately think, “Look, a book about aliens.” Honestly, they have every right to think that. That bulbous head, penetrating black eyes and narrow mouth has become iconic, thanks to movies like Close Encounters of the Third Kind, Fire in the Sky and Alien Abduction. Add to that a slew of books, all of it starting with Whitley Strieber’s Communion, that spawned a generation’s worth of alien and abduction exposes.

Here’s the real deal about the real Dover Demon. In cryptozoological circles, it’s really considered an unknown creature, as earthly in origin as Salma Hayek or Seattle Seahawks quarterback Russell Wilson. See how I fit my crush and football hero in there? (on a side note, the main female character in my novel, Hell Hole, was named Selma, a Mexican beauty with an iron will – I wonder who that could be?)

Unfortunately, there isn’t much known about the Dover Demon, a strange biped that was spotted by half a dozen teens over the course of 2 nights over 35 years ago. It came, it was seen, it disappeared into the mist of time. I’ve read all kinds of explanations for it, the most hysterical theory that it was a sick, young moose. That would be one hell of a strange moose. Never saw one without hair, walking on its hind legs with eyes as big as saucers and flesh the color of Fred Flintstone in the comics (the actual description of one of the witnesses).

The town of Dover is an affluent Massachusetts suburb. At points in its history, it had more horses than people. These were not yokels looking to make a splash in The National Enquirer. In fact, the witnesses didn’t want to make a fuss about it until one of them drew what he saw and it was posted in a local store. Then things took off for a few months before settling down. What he drew has become the standard image for the Dover Demon. He grew up to be an artist. Pretty good start to your career, sketching a creature that is still talked about decades later.

I can only imagine the terror those kids felt, walking late at night down a country road, spotting a strange figure keeping pace with them before disappearing into the woods. Or driving along and capturing the impossible in the beam of their headlights.

Strange stuff. The stuff of nightmare. My kind of stuff.

For those interested in learning more about The Dover Demon, here’s a brief synopsis along with links to where it can be purchased.

The Dover Demon is real…and it has returned.

In 1977, Sam Brogna and his friends came upon a terrifying, alien creature on a deserted country road. What they witnessed was so bizarre, so chilling, they swore their silence. But their lives were changed forever.

Decades later, the town of Dover has been hit by a massive blizzard. Sam’s son, Nicky, is drawn to search for the infamous cryptid, only to disappear into the bowels of a secret underground lair. The Dover Demon is far deadlier than anyone could have believed. And there are many of them. Can Sam and his reunited friends rescue Nicky and battle a race of creatures so powerful, so sinister, that history itself has been shaped by their secretive presence?

A Recap of Reviews