Where do we go when we dream? Into our subconscious? Some subterranean psychic chamber that stores everything we’ve seen and heard and are secretly afraid of.

Or, perhaps, our consciousness ventures into other realms that we assume are imaginary, but actually exist. Places where our minds can travel, so long as we leave our bodies behind.

Writing, when it’s going well, is similar to a waking dream. One experiences the same sense of oblivion, the same vivid images that seem to come from a subconscious place within us, if not an external source.

Venerable horror author, Russell James, has written a book about dreaming and the places it takes us. His latest offering, DREAMWALKER, his sixth under the Samhain Horror line, is about a college student who enters parallel dimensions when he dreams. And it appears that during the writing of this book, Russell may have sent his consciousness out to do a bit of location scouting.

Here he shares his story of visiting the places from his imagination, and the shock he felt in finding out they were real.

This time around, my novel creeped me out. 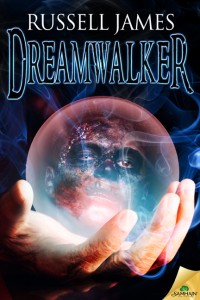 When I wrote DREAMWALKER, I wanted to set it in a location that emphasized the duality that the main character, Pete Holm, lives in. I’d read about Atlantic City and how the promise of casinos hadn’t created the promised city-wide rejuvenation. Atlantic Avenue divided the city, separating the glitter of the high-rise hotels from the poverty of the rundown residential areas. The location seemed perfect.

I’d never been to Atlantic City, or Philadelphia, another location in the book. But MapQuest is amazing, and I used grids of the streets to flesh out my fantasy versions. Pete takes a bus, so I Googled the bus station locations and schedules just to make sure such places existed.

After the second draft of the story was completed, I had a free weekend in Maryland and decided to visit these places I’d so casually created based on a few thin facts. I headed to Atlantic City, hoping I could work in some real-life observations to the story.

I drove through the city and went into shock. Locations I’d created in my mind’s eye were here in real life, almost doorframe for doorframe. The restaurant Pete works in, the rundown homes, the decaying basketball court. It didn’t feel like I was exploring someplace new, it felt like I was returning to someplace familiar.

In the late afternoon, I drove to Philadelphia, taking the same route my character takes when he tries to find the identity of the girlfriend in his dreams. In the city, I followed my invented route to her fictional hospice. There was no hospice, but there was a doctor’s office with an entrance that looked just as I’d imagined the hospice’s did. It gave me chills.

DREAMWALKER is about a college student who enters an alternate reality when he dreams. Did I enter some alternate subconscious reality when I invented the locations for my book? I don’t know. If I could, it would sure make writing the next novel much easier.

Russell’s novel has been getting rave reviews. Read it before you sleep, if you dare, and let it guide your dreams.